Hydrogen peroxide is a much safer and more environmentally friendly alternative to chlorine bleach and an easy swap for anything you have been using bleach for. What makes hydrogen peroxide so safe is it breaks down into water and oxygen leaving no chemical residue behind vs chlorine which does not break down and easily combines with other compounds to form dioxins and chlorinated organic compounds. According to the Environmental Protection Agency (EPA) dioxins are, “highly toxic and can cause cancer, reproductive and developmental problems, damage to the immune system, and can interfere with hormones.” If you would like to learn more about the dangers of chlorine bleach check out this post by Sustainable Baby Steps.

There are several other grades of hydrogen peroxide but for the purpose of cleaning only food and drug store grade should be used.

How to purchase Hydrogen Peroxide for Cleaning

You can easily pick up a brown bottle of 3% Hydrogen Peroxide at your local drug, big box or even a grocery store. Hydrogen peroxide is usually in the first aid section. Just add a spray nozzle (can usually find clean empty spray bottles at those same stores) and you are ready to start cleaning with it.

Food Grade Hydrogen Peroxide which is necessary for certain applications and what I personally choose to use as it is the purest form of hydrogen peroxide is a little harder to come across. Some health food stores sell small bottles but usually, it is easier to find and purchase online.

Food grade hydrogen peroxide tends to be more expensive if you purchase it already diluted to 3%. Some health food stores carry it and can also be purchased through online retailers like Amazon but it is more costly through Amazon and they don’t carry the best-sized bottles at the time of writing this post.  When picking a bottle you want it to be opaque, fit a spray nozzle, fit in your hand and be a larger size like 32 oz. so you don’t have to refill it that often, although 16 oz. will work as well. The 3% bottle of food grade hydrogen peroxide I like to purchase is this one from Sunfoods. The reason I like it is that it comes in a 32 oz. opaque bottle (important when working with hydrogen peroxide that bottle is opaque) that easily fits a spray nozzle. It is a little more costly but I then reuse the bottle when I dilute stronger concentrations so I only needed to purchase the bottle once.

35% Food Grade Hydrogen Peroxide can be hard to come across since it is so potent this is where I recommend it purchasing from keeping in mind 1 quart will make you approximately 15 32oz bottles of 3% food grade hydrogen peroxide cleaner. If you purchase the 2 quarts option which is the one I recommend it will be less than $1.60 per 32 oz bottle for the hydrogen peroxide portion. You can get the cost down even more with the 4 quarts option. It is easier to find 12% food grade hydrogen peroxide then 35% so you can purchase that as an option as well. It won’t be as cost effective as the 35% but will still be more cost effective than purchasing pre-diluted 3% food grade.

How to Dilute Hydrogen Peroxide

You do want to be very careful when working with 35% hydrogen peroxide as it is caustic, I always recommend using gloves and protective eye wear. But don’t let that intimidate you making and using it, it is a very simple process and is such an effective and safer alternative to chlorine bleach and other conventional cleaners. 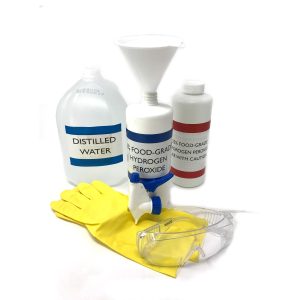 You can ½ this recipe if making a 16 oz. bottle of the solution.

Here are some things to be careful of when cleaning with hydrogen peroxide.

There are so many great uses for Hydrogen Peroxide that extend above and if you want the complete guide on how to clean your home without the use of toxic chemicals check out my book Easy Green Cleaning which covers absolutely everything you need to know for a green and clean home.

If you know people who would be interested in learning more about cleaning with hydrogen peroxide. Please share this post by using the sharing icons below.

This site uses Akismet to reduce spam. Learn how your comment data is processed.

Sign up to receive our FREE Five Step Guide on how to live a Healthier Greener Life!